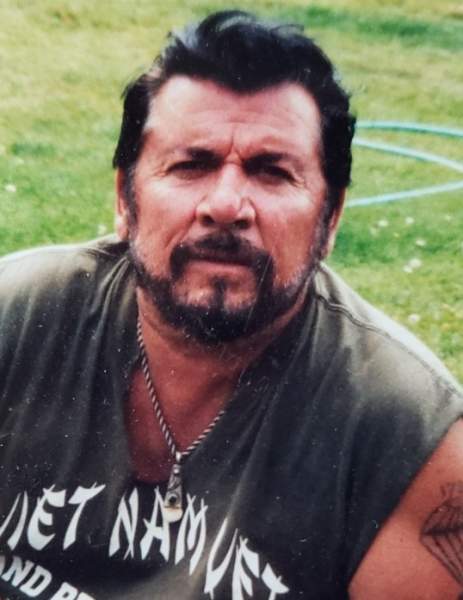 Born on April 24, 1943 in Costilla to Macario and Sandra Pacheco, Mickey was the oldest of 11 children. He was a 1961 Costilla High School graduate, and at the age of 19, enlisted in the United States Army. Serving in Vietnam with the 173rd Airborne Brigade “Sky Soldiers”, Macario was awarded the Purple Heart, Armed Forces Expeditionary Medal, and the Vietnam Service Medal. He received his Honorable Discharge for the Army on December 13, 1965.
In September of 1966, Mickey married Teresita Torres of Mora, NM, and shortly thereafter they moved to Los Angeles, California. In 1974, Mickey and Teri answered the beckoning call of their beloved New Mexico mountains, and moved back to Costilla, where they lived out their life together, going on to be the proprietors of The Highway Bar and Casa de Teresa restaurant. Macario also served as a professional hunting guide, was a member of the Rio Costilla Cooperative Livestock Association, served on the RCCLA Board of Directors, served as a Dam Caretaker, and was a volunteer Firefighter and EMT.
Macario was preceded in death by his wife, Teresita Pacheco, father Macario Pacheco, paternal grandparents  Frank and Francisquita Pacheco, maternal grandparents Melton and Lupe DeHerrea, in-laws Marcelino and Adelia Torres, Cesarita Romero, Policarpio Torres, Helen Romero, Lorraine Reichert,Bertha Vialpando and Pauline Romero.
Mickey is survived by daughter, Sharon Pacheco (Tim), grandchildren, David (Sheri), Amber (Manuel) and Charles, great grandchildren, Victor, Eli, and Lorraine. Mother Sandra Livingston, brothers and sisters, Manuel (Veronica), Veronica (Albert), Margaret (Mike), Theresa (David), Anthony (Maria), Raymond (Laura), Marty, Michael (Joella), Meliton and Gerrardo (Lorraine), brothers-in-law Paul (Bertha) Ernest (Marcella), many other relatives and friends.
Rosary will be held on July 12th, 2021 at 9 am with funeral mass following at 10 AM at Sacred Heart Church in Costilla, NM. Interment  will be held at a later date at the Torres Family Cemetery. The family of Macario V. Pacheco has entrusted their loved one to Devargas Funeral Home of Taos. www.devargastaos.com. 1-866-657-4019

To order memorial trees or send flowers to the family in memory of Macario Mickey V. Pacheco, please visit our flower store.