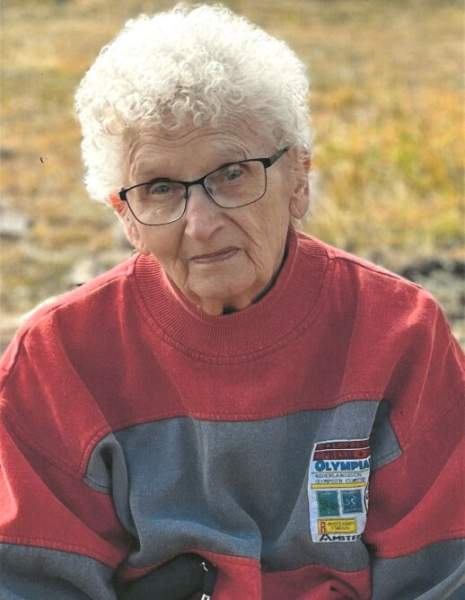 On December 27, 1929, Margaret was born in Villisca, Iowa to Oren J. Rush and Mae (Gessaman) Rush of Elliott, Iowa and she grew up on farms around Elliott, Iowa.  Margaret is preceded in death by both of her parents, a sister, a niece, and her beloved cat “FawzieBear,” which she had for over 10 years.

She moved to Peñasco, New Mexico 16 years ago from Evansdale, Iowa and she loved the area she lived in.

She is survived by two daughters; Elaine Ostdahl (Rob) of Evandsale, Iowa and Diana Fernandez (Franklin) of Peñasco, New Mexico.  She has four grandchildren; Jeremy Ostdahl of Evansdale, Iowa; Yvonne Irving (Dave) of Albuquerque, New Mexico; Nathan Alvarez-Fernandez (Andres) of Pembroke Pines, Florida; and Aaron Fernandez (Jessica) of Albuquerque, New Mexico.  There are six great-grandchildren Krysta Rodriguez (Tommy), Estrella Rodriguez, Drew Ostdahl, Jared Irving, Brandon Irving, Drew Irving and Gavin Fernandez.  Margaret was going to be a great-great grandmother to Rosalina (Krysta and Tommy) who is going to be born on May 22, 2022.  Gordon Milner was a very close first cousin to Margaret and she thought the world of him.  She is also survived by many friends from back home in Iowa and here in Peñasco, and friends of the Kingdom Hall of Jehovah’s Witnesses.

Some of the favorite activities of hers was rock hunting (rockhound), going on rides to the mountains in “The Buggy”, going on picnics and family visits.  She loved the outdoors, tending to her flowers and watching birds, especially the hummingbirds that would return every year.  Margaret was known for her “HUGS” which were very genuine, warm, and from the heart and she will be sorely missed by all who knew her.

Margaret’s family would like to thank Taos Living Center, Rehabilitation Department, and Anvoi Hospice for the excellent care she received after her accident.

Memorial Service will be held on Friday, May 27, 2022 at 1pm in the Evergreen Chapel of DeVargas Funeral Home of Taos.  A private interment will take place at a later date.

The family of Margaret Doolittle has entrusted the care of their loved one to DeVargas Funeral Home of Taos.  866-657-4019 www.devargastaos.com

To order memorial trees or send flowers to the family in memory of Margaret Doolittle, please visit our flower store.