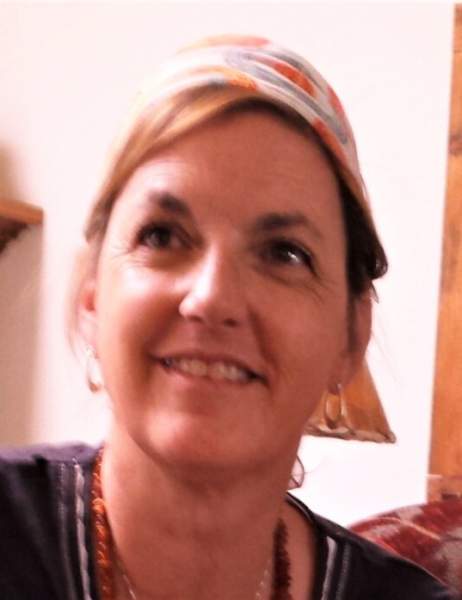 On the beautiful clear morning of Nov 2, 2021, our dear sweet sister, auntie, and friend Sabrina (Bean) Carmel Davis returned to the Creator. She was 58 years old. After a three-year battle with cancer, fighting until the end, Bean succumbed on her own terms with her family at her side.

Sabrina was born on October 6, 1963, in Denver, Colorado, the fifth of six children of Gary and Carroll Davis.  Bean was raised in Denver and Salt Lake City before moving to Seattle with her family where she graduated high school.  She was an artist, LBGTQ advocate, and passionate supporter of animal rights.  Sabrina eventually found a home and community in which to pursue her free-spirited lifestyle on Orcas Island in Puget Sound, where she worked as a professional house painter.  To be closer to her family, Bean relocated first to Albuquerque, then settled in Taos.

Bean was an artist and iconoclast, a musician and DJ, and an animal lover known for her a special connection with her four-legged companions.  Bean was known for her razor sharp wit, warrior woman spirit, and love of spiritual practices. As she grappled with her illness, Sabrina transformed her unique vision of the world into beautiful mosaic artwork.

A memorial service for Sabrina will be scheduled for Spring or Summer of 2022.

The family of Sabrina Carmel Davis has entrusted the care of their loved one to DeVargas Funeral Home of Taos.  866-657-4019 www.devargastaos.com

To order memorial trees or send flowers to the family in memory of Sabrina Carmel Davis, please visit our flower store.