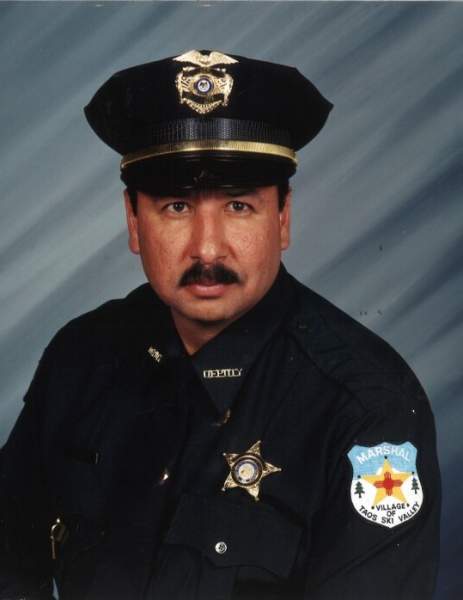 Sam J. Trujillo, 65 of Penasco, NM passed away peacefully with his wife at his side on Wednesday, November 3, 2021.   He was born at the Red River Hatchery where his devoted father was employed.   Sam is preceded in death by his parents Antonio and Candida Trujillo of Taos.

Sam was a graduate of Taos High School in 1974.   He started work as a 911 Dispatcher and then decided to commit his life to Law Enforcement.   After 16 weeks of training, Sam graduated from the Police Academy in Santa Fe.  Sam started his career at the Village of Taos Ski Valley in June 1999 as an Officer and advanced to Chief of Police in 2018.

He was married to the love of his life, Darlene in 2001.   They had a story-book marriage, always hand-in-hand.   Sam was a loving Father and Grandfather.  His favorite pass time was fishing with his wife and watching John Wayne movies.  He was a man of many talents.   He loved working with his hands, fixing things.   He’s nickname at home was “Mr. Fix It”.   He was always ready to help anyone in need, especially his In-Laws.  He was a devoted 7th Day Adventist and a pillar of his church.  He was a man of prayer and was always found reading his Bible especially in the early hours of the morning before leaving to work.   He enjoyed sharing the word of God with his family, co-workers, and friends.

Sam was very much loved by his friends, relatives, and the Community.  Taos and Penasco has lost a giant of a man and he will be deeply missed.  His smile and joking personality was very contagious.

A service honoring Sam will be held on Friday, November 12th outside at the Plaza De Espanola, 706 E. Bond St. at 11:00 a.m.   Masks and social distancing will be required.

Police escort to burial site in Taos via Penasco to his home to immediately follow service to Pacheco Cemetery, Camino Del Medio.   Again, we will require masks and social distancing for attendance.

The family of Sam J. Trujillo have entrusted the care of their loved one to DeVargas Funeral Home & Crematory of the Espanola Valley. 505-747-7477 www.devargasfuneral.com

To order memorial trees or send flowers to the family in memory of Sam Trujillo, please visit our flower store.